1. Josh Harris has been reevaluating his life for some time now.  In the wake of the SGM scandals he resigned from ministry and decided to go to seminary.  He is also rethinking the impact his books have had on those raised in the evangelical church during the time when everyone was “dating Jesus” and “kissing dating goodbye.”  As a result, Harris has been apologizing quite openly and publicly for the damage caused, specifically by his book I Kissed Dating Goodbye.  This seems a step in the right direction, I hope in time he will step forward and disavow the book all together.

2. Carolyn Custis James has written a seminal post on the necessity of women learning and practicing theology for themselves.  While this article is from February, I recently came across it again and was reminded of how powerful this post truly is.  If you’re unfamiliar with Carolyn’s work, I strongly advise starting with her fantastic book Malestrom.

3. My longtime friend Michael Stark has a written interview with Suzann Mollner, executive director of Beyond Beirut, an organization which works with Palestinian refugees throughout the Middle East.  Whatever our ideologies on the Middle East, we cannot demonize innocent people displaced by the violence and destruction.

4. Broderick Greer tweeted an excellent picture showing the difference between equality and equity, and discussing why both are little more than stop-keeps. Our goal must be to move beyond both and begin dismantling the systems of oppression themselves, not simply alleviating their symptoms. 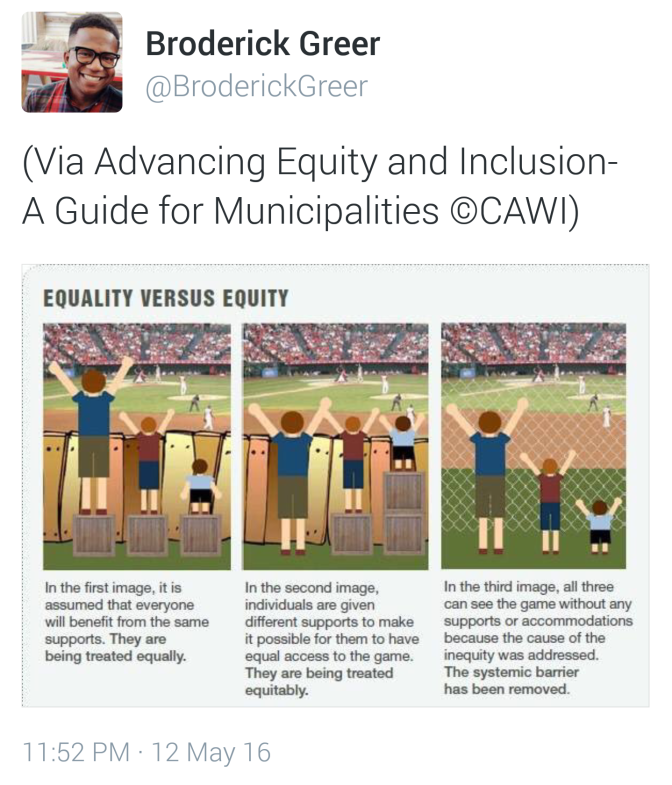 6. RL Stollar has carefully analyzed Nancy Wilson’s book The Fruit of Her Hands exposing the lengths the lengths that Doug and Nancy go to in order to disenfranchise women.  Content Warning: Discussion of child sex abuse and marital rape.

7. Gordon College has been accused by an esteemed facult member of intentionally and prejudicially retaliating against her for disagreeing with the school’s stance on the LGBTQ+ community.  Daniel Kirk does an excellent job of laying out and analyzing the facts in order to ask the difficult question, is there still such a thing as “Christian higher learning?”

8. The hashtag #MaybeHeDoesntHitYou has taken Twitter by storm today.  Hundreds of women are exposing the ways in which abuse is not just about physical violence.  It is important that we remember that abuse comes in so many different forms and all of them are damaging and evil.  So much needs to be done to move past the stereotypes and discrimination aimed at abuse victims.  For many, the first step is to be aware of just how big the problem is.  This hashtag provides a glimpse into the suffering of so many abused persons.  As Christians, we would be betraying the cross itself if we did not listen.

9. This post, which I came across via Boz Tchividjian, is an excellent look at how systems of power work against and silence narratives of abuse. It is a powerful and gutwrenching analysis of the accusations of child sex abuse against prominent Hollywood director Woody Allen. Allen’s own son details how Allen’s lawyers and publicists have worked to prevent media outlets from giving it credibility. Some very convicting parallels between this story and so many which have occurred within the evangelical church.

10. As the debate rages over bathroom laws, experts keep reminding those promoting anti-transgender lies that there is no actual data to support the common myth of strangers assaulting women and children in bathrooms.  Consistently, there has been no correlation between transgender bathroom equality and sexual assaults. Instead, arguments in favor of these laws have repeatedly proven to be about preserving systems of privilege and comfort, even if that comes at the expense of a marginalized minority. It is time for us, as Christians, to begin learning to love and embrace our neighbors and stop perpetuating lies and prejudice.

11. George Zimmerman has demonstrated just how little respect he has for the sanctity of human life.  He has chosen to auction off the gun he used to murder Trayvon Martin in cold blood; move that can only be described as a callous and remorseless demonstration of contempt for his victim and the family and friends who still mourn him.  Zimmerman has even gone so far as to call the weapon an important artifact of “American History” demonstrating just how truly hate-filled a person he is. Thankfully, the auction websites through which Zimmerman has attempted to conduct this disgusting enterprise have all refused to associate with him.

12. In the course of researching for an upcoming post, I came across this gem from CBMW bigwig Gavin Peacock.  I won’t break down the whole post, but it strikes me that someone needs to inform Peacock that there was not even a canonized form of the NT until 397 C.E. and before that several books of what is now the NT had their authority fiercely challenged, while at least five other books considered extra-canonical now were seriously considered.  So when he claims that “inerrancy” was unquestioned for the first 16 centuries of church history, it feels important to remind him that a full quarter of those supposed centuries prove his claim to be demonstrably false.  Sadder still is that Christianity Today posted the article, despite the glaring factual errors.  Yet another example of how power and privilege are valued over truth and careful study in the evangelical church in the US.