For those of you not aware, earlier this month Dr. Larycia Hawkins was suspended from Wheaton College for the following statement.

I am not, here, going to rehash the details of this incident or offer analysis on a biblical or theological basis.  I have already offered those thoughts elsewhere, if you are interested you can find my them here.

I would, however, like to take a moment to highlight a very interesting quote from Wheaton College president, Philip Ryken.  This quote occurred in a May 14, 2014, article on Christianity Today’s website entitled “Should Christian Colleges Let Female Faculty Teach Men the Bible?” The piece centers around the incredibly troubling restrictions Cedarville University places upon female faculty.

Now, I want to take a moment to juxtapose that statement from a year and a half ago with a more recent statement from Wheaton College and Ryken himself on Dr. Hawkins’ suspension.

Here is what Wheaton has said:

And here is a direct quote from Ryken: 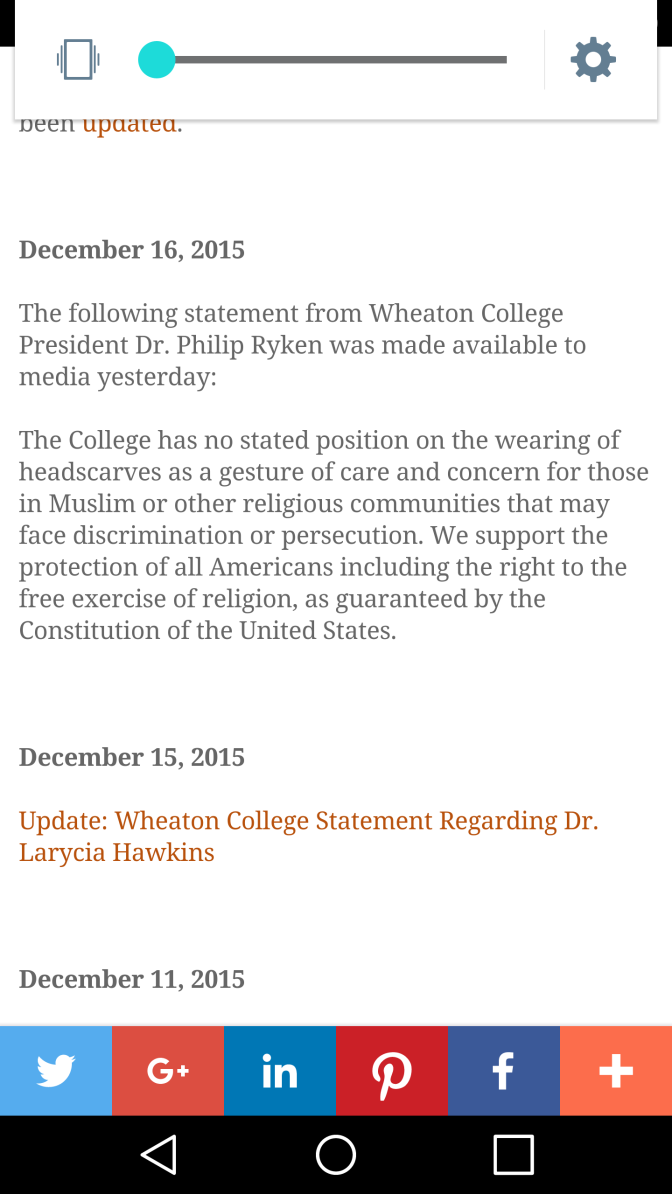 I think we need to ask the question:

If Ryken considers issues of doctrinal differences for the local church to decide, why has Dr. Hawkins been suspended?

These statements put side by side indicates that Wheaton most certainly considers this an issue of doctrinal dispute.  So, I ask, is there anything in the Faith Statement or Community Covenant of Wheaton that seems to prohibit Dr. Hawkins’ actions?

You can decide for yourself, but I don’t see it.  She has defended her position and argued Christ is the only way to fully understand God.

It seems to me something doesn’t add up with this whole situation.  I find it interesting that Ryken hisself has stated it isn’t about her headdress.  Why has he attempted to separate the symbolic action from the message it is meant to represent for Dr. Hawkins?

I would point out that Ryken has a history of association with groups that oppose women in ordination and full-time vocational ministry as lead pastors teaching men. In fact, he is currently a presiding council member of The Gospel Coalition. In the past Ryken has contributed seven articles to The Gospel Coalition’s blog site since being chosen as Wheaton’s president (though the most recent was in 2013).

Perhaps most interesting is that, upon Ryken’s appointment as president of Wheaton College in 2010, TGC’s Justin Taylor wrote an article in which he stated:

It is hard to overstate what good news this is, making me quite hopeful for the future of Wheaton.

He even advised that persons looking to pray for Ryken and the future of Wheaton College use an article by Jon Piper as a guide to pray for the school. In this article, Piper advise we pray that all seminaries consider “Who is sufficient for these things?” when deciding how to allow their students to pursue ministry.

Given Jon Piper’s position on women in leadership over men I think it is safe to say that Ryken was/is fully expected to make Wheaton a TGC friendly school.

With this in mind, it is notable, as I see it, notable to this discussion that Dr. Hawkins chose actions which placed her firmly as a woman assuming a symbol of feminine identity common to another religion.  She chose to make her statement of solidarity – one speaking on the theological similarities of Christianity and Islam – by assuming a distinctly female symbol.

I also consider it notable that other faculty members who voiced a similar opinion in the midst of this controversy have all been reinstated.  This is strange since it has been intimated that Dr. Hawkins clarification satisfied Wheaton’s Provost, yet she has been kept on administrative leave.

As such, given the juxtaposition of the statements above, it seems disingenuous to say this isn’t about the hijab.  Dr. Hawkins choice of headdress is, as Hawkins herself has stated, an act of theological praxis – she is “giving feet to her faith”. Her words and actions cannot, in any real sense, be separated.

Thus, in my opinion, it seem that by making herself a symbol of solidarity in suffering by wearing a hijab, removing the hijab would be tantamount to recanting her statement of solidarity.  Regardless of the double speak Wheaton has engaged in, it appears this always has been and will continue to be about the hijab.

If this is the case, then this is an issue which intersects with both racial and gender considerations.  If so, this is deeply troubling and causes me to raise questions I’ve asked before:

Should our Christian identity be defined by who we are not, by antagonism with other people? Or should it be rooted in our call to imitate Christ himself?

Since this, I have found some additional interesting information that I believe sheds light on this incident.

First, I came across this Chicago Tribune article which notes that Hawkins has been targeted for censure on three previous occasions (not sure how I missed this one before).

Second, Dr. Hawkins has released her original letter of clarification to Provost Stanton Jones, which to me indicates she clearly affirms Wheaton’s Statement of Faith.

Lastly, Hawkins has released the original letter of inquiry she received from Jones himself.

I point the reader to this line at the beginning of the letter which seems to indicate the Provost believed himself to be responding to an engendered act.

This, to me, seems to contradict Wheaton and Ryken’s official statements and show that this is, in fact, about the hijab and thus about gender.
What do you think?

A faculty diversity committee at Wheaton College has sent a letter to the Provost calling the school’s actions against Dr. Hawkins, “discriminatory on the basis of race and gender, and, to a lesser extent, marital status.”  The Provost has nevertheless recommended Hawkins for termination and will prosecute her at her termination hearing on February 9.

The Wheaton Record has published an enlightening Q & A with Dr. Hawkins regarding the actions Wheaton has taken against her.

The Wheaton Record has also published on its Facebook page a letter from 78 current faculty opposing the termination of Dr. Hawkins and asking that she be reinstated and the Provost rescind his recommendation for termination.

Professor Michael Mangis of Wheaton’s faculty has also stated that his own interactions with administration regarding this incident prove that race and gender are at play in this incident.

I also consider it notable that Franklin Graham has been very open about the pressures he is placing on Wheaton’s administration to fire Hawkins, as Graham has a history of making xenophobic remarks against Muslims.

Everything about this incident continues to point towards intentionally discriminatory treatement toward Dr. Hawkins on the part of Wheaton College administators based on the fact that she is a woman of color. These actions by administrators are deeply troubling and ought not occur at any academic institution, and especially not a Christian one which claims to celebrate diversity as much as Wheaton College does.

Christianity Today just announced that Wheaton’s provost has moved to drop termination proceedings against Dr. Hawkins and has publically apologized.  The decision on proceedings now lies with President Ryken.

Wheaton and Dr. Hawkins just released this disappointing news.  They have reached a mutual and confidential agreement to part ways.

Here is Christianity Today’s report on this development.