As some of you may know, I recently sent an open letter to the TGC (here). Within that post, I outlined a number of disturbing and abusive actions and comments made by many of the most influential people under the TGC umbrella. In the first twelve hours of the posts release, everything was pretty standard fare. Then something unexpected happened. A reader sent the post to Rachel Held Evans and she chose to share it on her twitter page. From there, everything blew up in the oddest of ways.

It was at this point that Doug Wilson and his followers became very heated. Wilson targeted RHE with a fairly standard DW flare (here). Wilson’s faithful then began to ferociously and mercilessly attack RHE for my words.

I want to be clear, I am not and will not be responding to Wilson’s post.

Instead, I want to respond to those who have claimed I misinterpreted Wilson’s words on the “propriety of rape” from page 13 of Her Hand in Marriage. Here is the full post:

These claims have been centered around (1) RHE’s specific tweet and (2) whether that tweet represents my own words. Here are both side by side. 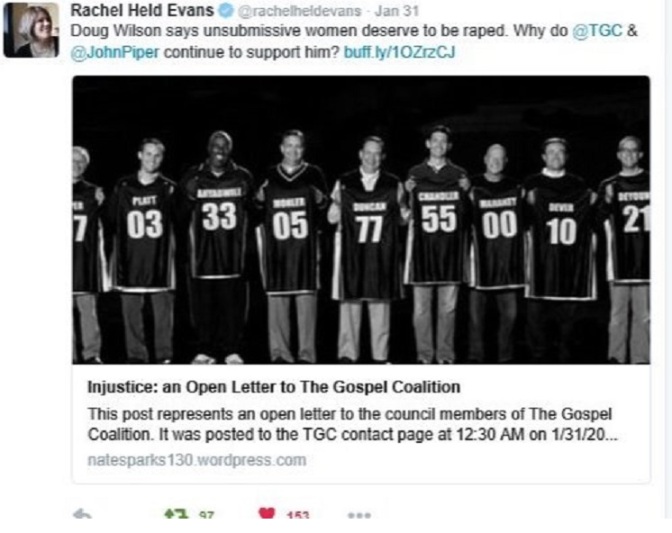 10. Doug Wilson teaches that until a daughter has been courted and married she remains under the headship of her father. Her father must be the authoritative presence in her courtship who protects her. However, if the young girl should buck this system at all she is asking to get raped. Further, the fact that she has been raped indicates a certain propriety to the occurrence of rape as a supposed consequence of rejecting the “male headship” of her father.

Now I want to say this carefully. When I originally wrote my post. I didn’t have anything as direct as RHE’s statement in mind. But, after having had time to think it over, I agree with her. RHE’s interpretation of my words is an accurate interpretation of my own thoughts.

I want to take a moment to break down this rather long paragraph from Wilson’s book. Much of the controversy has centered around a single sentence, but the reality is the quote occurs within a very enlightening context. As such, I want to outline several statements by Wilson within this paragraph; which lend to the interpretation that Wilson is saying “unsubmissive women deserve rape.”*

It is notable, then, that

Wilson has a well-documented history of using abusive language against women who don’t support him (see open letter linked above).
So one must ask:

If Doug Wilson doesn’t think women who don’t submit deserve to be abused somehow (not even talking about rape yet!), why does he so often resort to ad hominem attacks and vitriol filled invective against his female detractors?

If it is the job of godly men to protect women from ungodly men, is Doug Wilson’s attack on Rachel Held Evans his way of tacitly proclaiming, “This woman is not under my protection, nor is she worthy of your protection.”?

Given Wilson’s own rhetoric, it is hardly any wonder that, as a result, that his followers have harassed her, calling her “crazy bitch”and sending her incredibly disgusting and violent images. 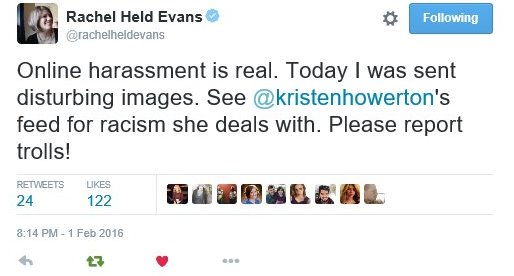 Doug Wilson’s empire of “biblical manhood” is created by defining his masculine identity by subjugating women, and he encourages his follower to do the same. This is precisely why he targeted Natalie Greenfield’s father and created false details to make him culpable for her abuse. Admitting his own pastoral failures in protecting Natalie Greenfield’s abuser would be confessing that he does not meet his own standard for masculinity.

If godly manhood is protecting women from abuse by exerting patriarchal authority over her (that is what he means by “submission”!) then godly womanhood is defined by being under the authority of a man.

The only way to excuse his own abusive actions is to blame Natalie and her father and insist her abuse was the result of some sort of ungodliness on their part.

In both word and deed, Wilson shows that he believes ungodly women (women who do not submit to masculine authority) bring abuse upon themselves.

2. This is very important because of what Wilson says next. After talking about types of masculine protection – with the hierarchy being father/husband before legal avenues – Wilson makes the statement that spurred controversy.

Now, it seems important here to define some terms. First, here is the Merriam Webster’s Dictionary’s definition of both “Tacit” and “Propriety”:

Tacit means “expressed or carried on without words or speech” and “Implied or indicated (as by an act or by silence) but not actually expressed.”
Propriety means “behavior that is accepted as socially or morally correct and proper” and “the state or quality of being correct and proper”

By saying “unsubmissive” women “tacitly agree to the propriety of rape” Wilson is, in fact, saying that they have actively consented to a societal order in which rape is a correct and proper response to their actions.

That is, he at the very least says they have (a) consented to such a social order and (b) that a social order which rapes these women is not only “proper” but also “morally correct”. Perhaps Wilson is not the wordsmith he claims to be, perhaps he chose random words out of thesaurus and didn’t bother to look up their meanings – but I’m going to go out on a fairly sturdy limb and say he meant exactly what he said.

This cannot, as some claim, mean that he is only saying the women who are unsubmissive think this.

One, because it is absurdist for Wilson to claim he has crawled into the minds of these women and realized that they really don’t have a problem with being raped (remember tacitly connotes active nonverbal consent, not just passive acknowledgment).

Two, because the wording of the sentence states that these women are assenting to something that he, in fact, has already said he believes exists. That is, Wilson has already said that insult and harassment and abuse are how ungodly men behave. He didn’t say, “This is how ungodly, unsubmissive women think they behave” he directly said that is how he knows ungodly men behave. Thus, the societal order of rape he describes is already something he has generally presupposed in the proceeding sentences.

So again, whether or not Wilson thinks they “deserve it” he definitely thinks it is a “proper and morally correct” response to their actions.
The question that presents itself, then, is “Why is rape of these women proprietary?”
3. This is actually fairly simple to answer. Because Wilson believes horrible things happen to those who do not obey God’s design.

And what is God’s design?

If godly men have patriarchal authority and godly women submit, then the design of God that Wilson believes must be adhered to is female submission under male authority. And we know that the women who fight against this by supposedly rejecting all male protection (because for Wilson protection equals male authority!) are actively consenting to the proper and morally correct social order of rape. Thus Wilson is saying “Women who reject the system get raped because they have defied God.”

And why do these terrible things happen to these women?

Because those who exalt themselves will be humbled (Wilson forgets to cite Matt 23 here).

And who does the humbling?

It stands to reason that these “unsubmissive” women are humbled through rape for defying God’s design, and if Wilson’s wholly good God is actively working all suffering to bring people to find the ultimate good in him, then God is an agent in the rape of these women. Especially since Wilson’s own theology holds that suffering has long term benefits.

So if a woman God desires to elect (by Wilson’s understanding) is being called to God by the long-term positive affect of being raped by an “ungodly man” then she not only deserved what she got, it was a good thing. But if an un-elect woman should be raped, this is also good because God is fully within his rights to punish the wicked and perhaps her lack of faith will be exposed as apostate. In either case, the woman got exactly what Doug Wilson believes she deserved.

It is for precisely the reasons stated above that I agree with Rachel Held Evans’ summary of my statement. And so I will reiterate the point:

Doug Wilson states that unsubmissive women deserve to be raped.

In closing I want to emphasize that women do not choose to be raped. They are not complicit in rape. They bear no moral responsibility for rape. We, as Christians have a responsibility not to oppress victims but to stand beside them, support them, believe them and help their voices be heard.

Jesus explicitly states in the Gospels that his followers will be judged by how they treat marginalized persons. Wilson’s words are deplorable, and directly contributed to a culture of sexual violence against women. As such they are a betrayal of the Gospel and of Christ.

Anyone who would seek to defend his words, or to minimize their meaning, is equally culpable.

48 thoughts on “A Controversy of Propriety”